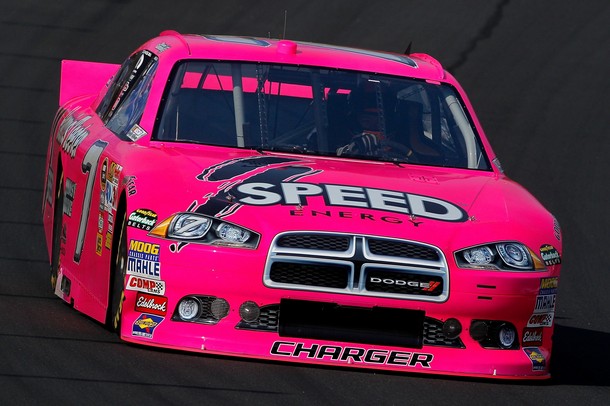 Charlotte, NC (May 26, 2011)– After taking on the legendary short course of Glen Helen Raceway in the Lucas Oil Off-Road Racing Series last weekend, Robby Gordon returns to the helm of the No. 7 SPEED Energy Dodge Charger this weekend for the Charlotte 600 at Charlotte Motor Speedway.    A Memorial Day tradition, the 600 brings the NASCAR teams to their home track for the longest race on NASCAR’s elite series schedule.

Gordon will be driving a fluorescent pink Dodge Charger R/T representing the Unleaded flavor of his new energy drink, SPEED.   Harris Teeter, a regional grocery store chain headquartered in Matthews, North Carolina, will be featured on the rear quarter panel while Sam’s Mart will be riding along on the C-post of the No. 7 race car.  Sam’s Mart owns and operates convenience stores in North Carolina, South Carolina and Georgia. In a promotional partnership with Dodge Motorsports, the blockbuster hit, Fast Five, will be on the No. 7 again this weekend.

“The 600 is the longest race of the year.  It’s really about endurance and the key is to be there at the end.   It’s important to stay on the lead lap all night, if we can survive and use a strategy to our advantage we could get a good finish.  We’ve got two great partners on the car this weekend with Harris Teeter and Sam’s Mart.  Both are locally-headquartered companies and will be bringing a lot of customers and employees out to support us.  I’ll be driving the bright pink “Unleaded” car this weekend, so we’ll be hard to miss,” says Gordon.

Race Coverage – NASCAR fans can watch the 600 live on FOX on Sunday evening, May 29th, beginning at 6 p.m. EDT.  On Thursday, May 26th, SPEED Channel will broadcast qualifying from Charlotte Motor Speedway beginning at 7:10 p.m. EDT.  For news and updates, please visit SPEEDENERGY.COM, PLANETROBBY.COM or follow SPEED Energy on Facebook and Twitter.

About SPEED Energy – SPEED Energy is available in three flavors: Unleaded, Fuel, and Octane, which provide the human machine with the fuel it needs to keep up with the SPEED of life.  Each drink contains a potent blend of B-vitamins, caffeine, taurine and ginseng.  SPEED, packaged in 12 ounce sleek cans with a stylish black top and sexy body, is available in singles, 4 packs, and cases.  SPEED Energy is available at major retailers, convenience stores, grocery stores, bars and nightclubs.  For a retailer near you, please visit www.speedenergy.com.